My many, many moves | Frogbox Blog Contest


I'm a base brat or for you civvies out there (that's civilians to... civilians), I'm a kid who grew up on military bases. My father flies jets for the Royal Canadian Air Force.

The main pro of that upbringing? Being able to top the threat of every other kid in the schoolyard.

The con? Moving. A lot. I relocated to new towns five times growing up, which isn't too many compared to some of the other brats I knew - they seemed to move every six months - but it was enough. Enough to disrupt my friendships. Enough to foster a sense of always being on the move, never really settling. Enough to make me jealous of people who have "childhood friends."

I wish I hadn't moved so much as a child. Now, of course, that I'm an adult who's curious about the world, I'd love to move more. I want to go exploring. But as a kid, I wanted my friends, hard won through a strong effort to overcome my natural shyness.

The act of moving is disorienting. Five times (OK, I don't really remember my first move. As an infant, I packed light) all my stuff was jammed into boxes. What felt like the sum total of my life was compressed into a few square, badly packed feet.

Gahd, it was stressful. And that's from a kid's perspective, I can't even imagine how rough it was for my parents to organize an entire household, pack the kitchen, pack the livingroom, sell old furniture, pack three kids' junk, unpack to find the one item the oldest daughter needed, repack, unpack to find what the younges daughter needed, load it into a truck destined for a new town only Dad had visited...

Which brings me to Frogbox, the North American company that supplies clean, reusable packing containers to people on the move - dropping them off at old house and picking them up at your new home. (They're running a blog contest right now, more on that below.)

In the stress of moving, there were moments of comfort and fun. Always eating out, because all the kitchen gear was already packed. Friends and neighbours dropping by to help with the move. Finding the long-lost book you thought was gone for good. These little perks in the midst of unsettling times helped a lot. They were little golden moments along the path to a new town.

So cheers to Frogbox for helping make moving easier, cleaner and more environmentally friendly. I wish I'd had you along for the ride when I was a kid beyond the obvious reason of building the ultimate Frogbox fort.

As I mentioned, Frogbox Winnipeg is running a contest through their Facebook page. Just write a blog post that touches on Frogbox. It can be about moving. It can be about how you try to be environmentally conscious. It can be how you'd like a Frogbox as an ice box for your summer brews. Anything.

There's some sweet shwag you can win, but more so, you're helping get the word out about a fun local company. Deets below. 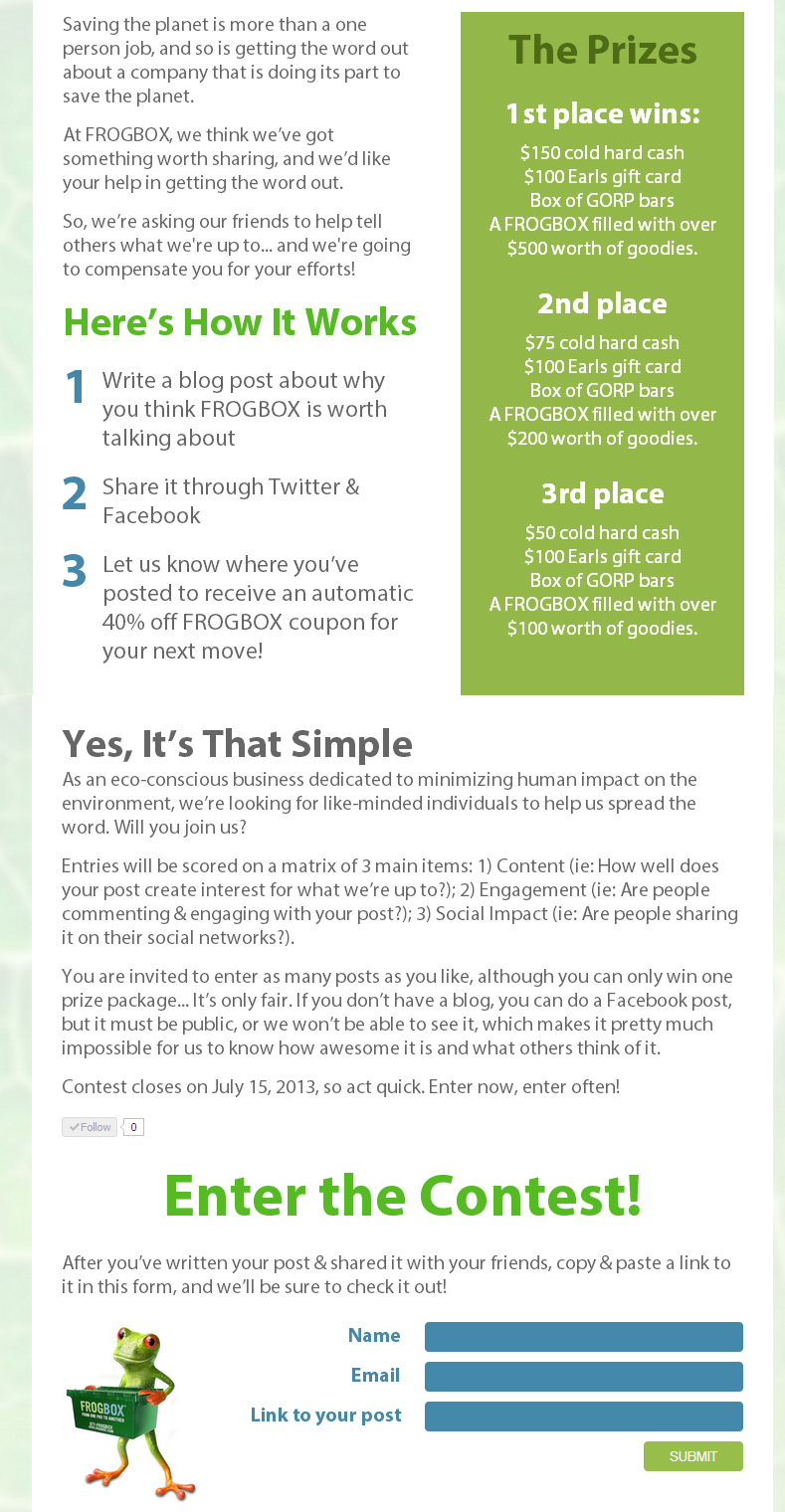