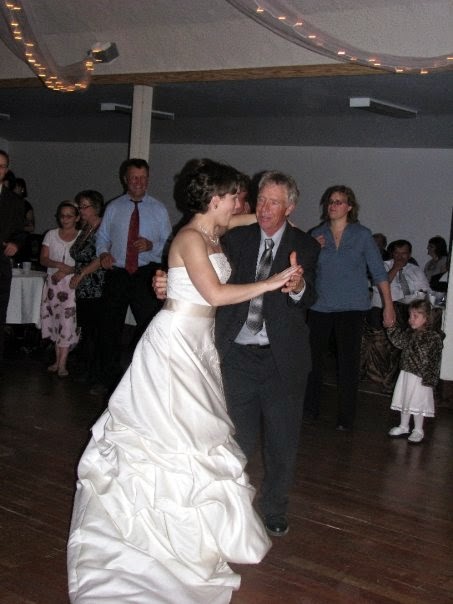 When Mel first brought me to Bruxelles, Donny shook my hand like he would crush it. When Mel and her mother moved into the living room, he sat me down at the kitchen table, poured out an envelope of small pieces of cardboard and said “These form a letter T.”
He leaned back in his chair and crossed his arms.
I had to solve this puzzle to date his daughter. I couldn’t.
After 10 minutes of trying, he’d had enough.
“AWW GEEZUS” he said and started to solve the puzzle himself.
But he had forgotten how it went together.
“Isn’t that awful? Do you want a chocolate bar?” and he took off into the store.

When I asked Donny if I could have his blessing to marry Mel, he asked me if I could help him tear up an old sidewalk first.

The first time Donny met my mother, Mel and I had been dating for a few weeks. Both my mother and the Marginets came to our third year university production of Lysistrata. The play is a Greek farce, with jokes about anal sex, bestiality and cocks. The cast wore giant fake phalluses.
After the show, I walked toward my timid mother and sister in the lobby of the Gas Station Theatre. They were clearly horrified by what they had just seen. Donny intercepted me.
“Holy fuck that was good! Holy Jesus! I mean shit that was funny,” he said, pumping my hand. He turned to the nearest person to bring them into the conversation - my quiet Christian mother. “Holy Fuck, wasn’t that great?”

Walking into a social, wedding or bar a wave of recognition would spread through the room.
“It’s Donny.”
“Hey Donny.”
“Donny, come here.”
He was always the most popular man at the party.

When something broke in our house and my poor technical skills wouldn’t solve the problem, he would drive two hours from Bruxelles to fix it. Once it just involved reattaching a wire in one outlet. He never gave me the gears. He was happy to help. We’d sit on the front step after and he’d ask me questions as he smoked.

I’m often the second person up in the mornings when staying at the Marginets. He was so pleased to see me walk into the kitchen - someone to talk to, at last.

He asked me to go for drives. We wouldn’t talk much. We’d sit in the cab of his truck as he drove, showing me his rolling Tiger Hills.
Posted by Matthew TenBruggencate at 7:46 PM