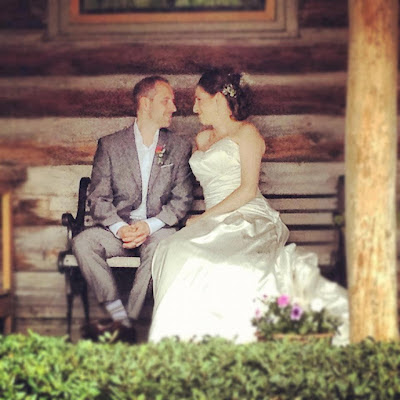 When James asked me to give a speech tonight - to toast him - my first reaction was happiness, pleasure and pride. What an honour.

My second reaction was fear, timidity, impotence and, yes, hate. How dare you ask me to try and sum up your diverse, wacky, adventurous life. Ask me to eloquently summarize a true renaissance man in five minutes? What a tool.

And he is a renaissance man. In the 13 years I've known him, James has been:

And those are just occupations. Jobs. That list doesn't include his travels, his hobbies, his many, many volunteer projects. The full list is something I can only guess at. I think if the two of us were in a plane crash together, in some remote part of the world, like Siberia, and we survived and made our way out of the wreckage, some fur-covered man would find us in the snow, take off his hood and go, "F---in' Jaaaaaaaaames!"

James told me when he applied to Cambridge and had to list out his background, he included a note saying "You'd be forgiven for thinking I'm an amateur addicted to novice pursuits. But what I actually like to do is learn something, conquer it, do it perfectly and then move on." That's pretty good. But my favourite quote about James came from our university dance teacher. Actually, it wasn't really a dance class. We didn't learn any dances or choreography. It was a Movement for Actors class, where we learned to move around a room theatrically. I can't explain it better than that.

James was having trouble getting the class, understanding what the teacher wanted. So one day, during an exercise, he just let loose; he did what he wanted, he vocalized and flailed and had fun. And when the exercise was over, the room was quiet and the instructor looked at James and said, "You are the victim of your own enthusiasm."

James is the victim of his own enthusiasm. His love for action - for setting audacious goals, for achieving big things, for helping people - has pushed his mind and body to the limit (sometimes further). James is the victim of his own enthusiasm. And the world is better for it. And so are the people, like me, who are lucky enough to have him in their life. I've seen James, with 15 balls in the air, make time for me in his schedule, help me, listen to me when I needed a friend. And when I'm done talking, he rushes off to save the world or write a novel or perform a Chopin waltz. How can I possibly sum a guy like that up?

James is a victim of his own enthusiasm and so are we, the people who get swept along with him. Mel tells a story about when we were all in university and James decided to go biking across Europe on a low budget. The lowest budget. The "sleeping in a churchyard under cardboard in shifts so the muggers don't stab us" budget. Mel was working at the same place as Tristan, James' brother, and when they were on shift together, they would compare notes. "Have you heard from James?' "Is he still alive?" "Should we send him money so he can afford to eat more than just bananas?" We are all victims of your enthusiasm.

Kendra, you are about to become the chief victim. The sacrificial lamb. I remember the first time I met Kendra, when she served me a drink from a box of wine that had been heating nicely over a vent for several hours. She looked at me, daring me to be upset and immature, assessing me, analyzing me, forming an opinion of me when I was supposed to be forming an opinion of her. When we were back in the car, James asked me what I thought and I think I said something that sounded like "good luck." In a much nicer way, of course, but I wasn't too sure about Kendra.

James, however, is not as timid as I am. So here we are today. And I have found that Kendra's sharp mind is matched by a soft heart, a passion for the arts - good choice - and a genuine concern for the people around her. James, Kendra - you're both insane. And absolutely wonderful. I hope you continue to be victims of each other's enthusiasm, plans, dreams and love for the rest of your lives. It won't be easy, but it will be great.

If you'll all join me in a toast to one of the best people I know.

Posted by Matthew TenBruggencate at 9:06 AM