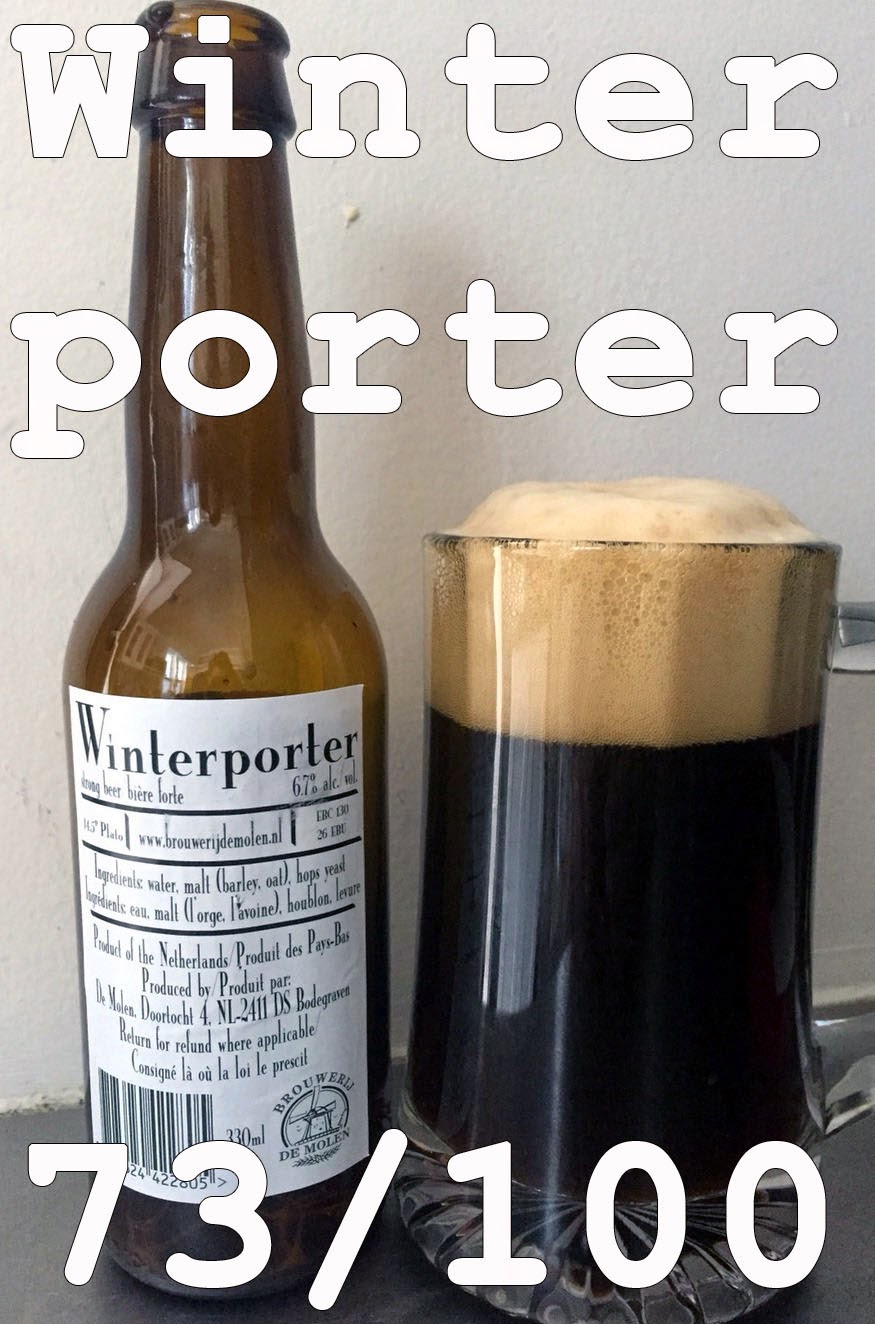 Good day everyone.  I am glad to be back in Winnipeg once more and to get back to blogging about the rest of the Advent Calendar beers.  I apologize for not posting much while I was away.  I took notes and have lots to blog about, I just was busy spending time with family and friends and could not find the time to sit down at a computer.

Today’s beer comes to us from the Brouwerij de Molen in the Netherlands.  It is a Winter Porter aptly named “Winterporter”.  The breweries name means “The Mill” and is located inside a historic windmill building called De Arkdulf, which was built in 1697.  As well as a brewery they also have a retail business on site and a restaurant which creates food to pair with their beers.

Founded in 2004 by head brewer Menno Olivier, this brewery can produce 500 litres per batch with an annual production of 500 hectolitres.  The equipment at the brewery includes converted dairy tanks which are used as fermenters and the bottles are still capped and corked by hand.  Today the brewery is able to produce 2500 litres at a time and has an annual production of 6000 hectolitres due to the purchase of a new building 200 meters away from the mill.  One interesting thing about this brewery is that they do not dispose of unsatisfactory beer.  Instead, this beer is distilled into a “beer liqueur” at 20% abv and is then sold as well, reducing the spoilage of the beer and allowing them to still make profit off bad batches.

Porters are style of beer we have seen already in this calendar and are a dark style of beer that was originally developed in London from well-hopped beers made with brown malt.  Originally this style of beer was created by mixing an old ale (stale or soured), a new ale (brown or pale ale) and a weak one (mild ale) to combine and create a new beer altogether than balanced the flavours and left a pleasing beer that was neither like the new nor the old.

Porters and Stouts are of the same stock.  In fact, when Guinness first launched its world renowned stout it was as a focus on the mass-production of Porter.  At the time there were two strengths of porters, either X or XX.  Stout at the time simply referred to a strong or robust ale, it has since developed due to the advent of coffee roasters and many of the malts that they could use to impart both colour and flavor, but originally this was its meaning.  Porters were part of this thread.

This Winter Porter is essentially a Winter Warmer, a malty, hopped dark beer that has reasonably high ABV (6.5%).  Its light body adds some differentiation from the stouts and warmers we have had, as well as being brewed in the traditional porter style.  I’m excited to give it a try, so let’s get to the beer!

Rating: 73/100
Appearance: Dark brown in the glass allowing little light to pass but showing ruby highlights when held to the light.  Strong head that retains well.
Smell: Chocolate notes on the nose with a light sour fruity note as well as some yeastiness mixed in there.
Taste: Some sour fruit notes, reminded me a bit of grape juice to be honest, with some chocolate notes and a finish earthy/hoppy bitterness.
Mouth feel: Low carbonation, smooth mouth feel, light body.
Overall: Not an overly appealing beer with the sour fruit notes in it.  The light body is deceiving when drinking such a dark beer.  For a porter it is not bad.  I have certainly tasted better but this one brings some interesting tasting notes that I wasn’t expecting.
Do I like it: I do not like this beer.  It’s not a bad beer by any means, it just is not a good beer either.  Having just returned from the Maritimes and having some fantastic stouts, porters and other beers, I find this one to be lacking in some areas.

As a final note, over the holiday I decided that I will branch out and start my own blog as a sister site to my brother’s beer blog out of Toronto.  I’m not ready to give details yet and I hope that I will still be invited to blog here from time to time.  I will be finishing the Beer Advent calendar on this blog before moving my posts over to the new one.  Keep an eye out as I’ll give more details when I get closer to being ready to launch.
Posted by Matthew TenBruggencate at 4:32 PM