Right now Aqua Books has a 50% sale going on. All the books. Half off.

Please go and buy armfulls of books. As many as you can carry (you're going to have to race me and everyone else to the Can Lit section). 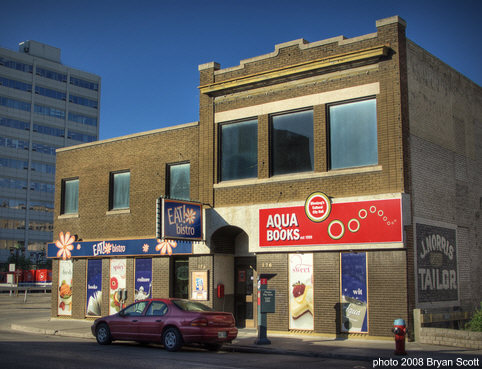 I confess to being an emotional guy. An emotional, artistic guy (let me tell you how I feel THROUGH DANCE!). And weighing heavily on my mind lately is the fate of Aqua Books - Winnipeg's Cultural City Hall.

The bookstore/cultural hub is located at 274 Garry Street - surrounded by seedy hotels, parking lots and corporate buildings whose workers flee to the suburbs at 5pm daily. It's location has been a source of criticism in coverage of the financial trouble prompting it's closure. "Should've chosen a better location." "No one wants to go downtown, it's scary." "Why would anyone put a bookstore there?"

They put a bookstore there because the owners believe in Winnipeg. They have a vision for a thriving, urbane downtown where people live, work and play 24/7. Where the streets are not deserted as soon as the work day ends. Where the rich art scene of the 'Peg is celebrated. Aqua Books was/is willing to be one of the "shock troops" of gentrification in the downtown.

Mayor Sam Katz has gone on air to lament the loss of mom and pop shops in Winnipeg, noting that small business is the economic engine of a city. In the same talk, he lays the burden of action entirely on the owners and the citizens of Winnipeg. As though City Hall had no interest or role to play in supporting small downtown businesses.

If you've never been, please go now. There's a 50% sale on a wider array of books than you can shake a bookmark at. And there's still events going on until at least the end of October.

If you've never been, here's a little sample of the typical atmosphere. Worth having in the downtown, no?

Posted by Matthew TenBruggencate at 11:40 AM