A Manitoban Who Loves His Job

In Manitoba we love to slag our crown corporations. Why?

Because they're so slaggable. Large bureaucracies with total control over influential areas of citizen life, populated by union-protected workers - not that unions are necessarily bad, but they can act as protectors to employees who, occupationally, should be taken out behind the woodshed (I tried to think of a 21st century equivalent to "taken out behind the woodshed" and failed. Google it.)

But there's at least one Manitoba crown corporation employee working hard to help serve our needs!

A few posts ago, I spoke about a mini-campaign I was going to launch to bring Picaroon's beer (delicious) to Winnipeg (so good!) for sale in local marts (mmmm). Last time I was out purchasing adult beverages, a helpful salesperson informed me that yes, there was a form I could fill out for said request. Joy!

I fired it off, truly doubtful I would get a response. Oh, me of little faith: 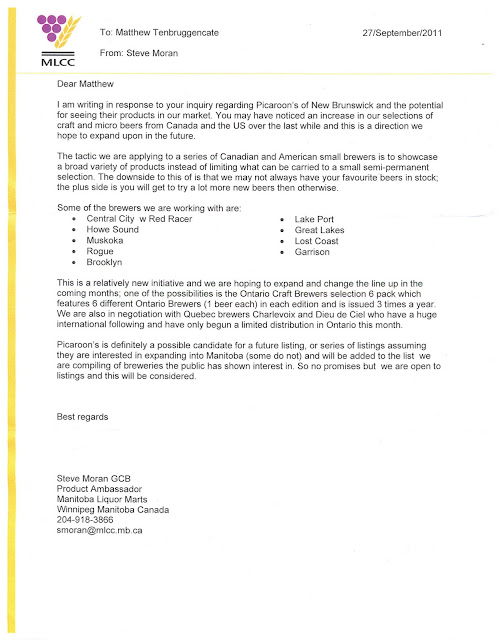 So this post is dedicated to you Steve Moran, Product Ambassador of Manitoba Liquor Marts! Thank you for being on the case. Of beer!

***
Generous Update - Theatre by the River's political satire is up and running (and getting great reviews). If you need a laugh in the midst of these elections (COUGHsonegativeCOUGH) you can't do better.
Posted by Matthew TenBruggencate at 12:58 PM