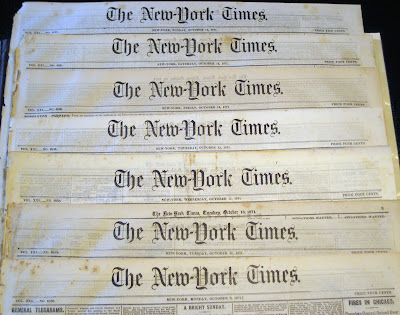 PAGE ONE: Inside The New York Times


Andrew Rossi's love-letter to The New York Times played at Cinematheque this past week. Partly a behind-the-scenes look at the daily workings of The Times, mostly a battle cry in its defence, PAGE ONE: Inside The New York Times is an articulate summary of the problems facing traditional papers today - migration of advertising revenue away from traditional media, hijacking of content by aggregate sites and the unwillingness of readers to pay for information they can get somewhere else for free.

The documentary answers a number of questions: are traditional papers loved (yes), do we need accountable, professional journalists to give context to an increasing flood of information (yes), do we need financially/legally backed reporters to hold the powerful accountable (yes). What PAGE ONE doesn't answer - because right now no one has an answer - is how to help journalistic outlets survive the e-revolution. As The Guardian review of the PAGE ONE puts it "good writing and good journalism don't happen naturally; they have to be nurtured."

A few ideas are floating in the air these days regarding journalism's future. Government funded models (such as CBC and NPR) exist but are consistently the targets of cutbacks (click here for David Carr's take on that model). Private fundraising is being explored by some papers. And a morphing of traditional medium from ink on dead tree to interactive apps offers traditional outlets a chance to compete with their twitter/aggregate/blogger competition.

A great comfort is taken, throughout the film, that media outlets have survived transformations and previously predicted doomsdays (to quote Emerson "Can anyone remember when the times were not hard and money was not scarce?" geddit?). And our love for trusted news sources like The New York Times hasn't gone away - it has only increased as the world wide waters get increasingly murky.

For example: in a true demonstration of impartiality, The Times movie critic panned PAGE ONE.


Yet another reason to love The Times.
Posted by Matthew TenBruggencate at 9:54 AM

Email ThisBlogThis!Share to TwitterShare to FacebookShare to Pinterest
Labels: CreComm, Media, Page One, Review, The Times