My advertising class' first assignment was to find an example of a good advertisement and a bad advertisement. Guess what follows? 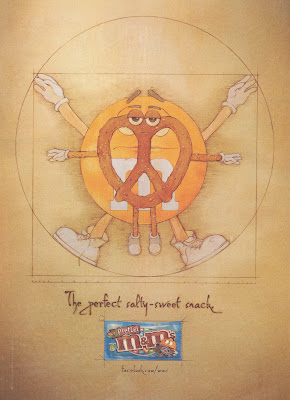 The M&M’S Pretzel ad, which appeared in the August 22, 2011 edition of People Magazine, is a play on Leonardo da Vinci’s “Vitruvian Man” – the artist’s depiction of the perfectly proportioned person at the centre of geometric principles.

By sneaking their unpretentious product into a classical depiction of perfection, M&M’S are simultaneously communicating the message that “M&M’S Pretzels are the perfect snack,” and giving their audience a laugh. The ad is an “inside joke” that rewards the viewer for having classical awareness, prompting the elitist response “I get it!” and an emotional tie to the product. Finally, there’s a further layer of cleverness in the ad’s use of Vitruvian Man; positioning the pretzel inside the candy character demonstrates the nature of a new product that M&M’S is still trying to make

Taking an iconic image and giving it a twist is a fantastic way to catch the eye of a viewer, making them pause to discern “what’s not right with this picture?” The graphic is simple and uncluttered; rendered with an artistic “sepia” filter that causes it to stand out among the sharply focused, real-life-photo ads that dominate the rest of the magazine.

This ad is the perfect example of a multilayered idea presented with a simple, yet artistic execution – a thinking person’s candy ad. 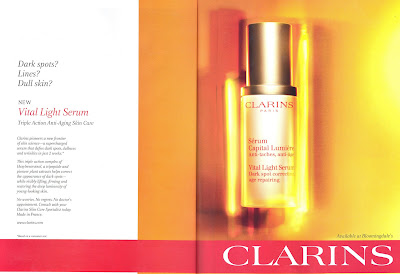 This Clarins ad, which appeared in the August edition of Vogue, manages to obey several rules of good design, but still be terrible. Approximately $300,000 of terrible too, based on the going rate of being vogue-ish.

The colours are rich and vibrant; the layout is simple and uncluttered – all hallmarks of a good ad. But the graphic is uninteresting, with no emotionally charged promise of a prettier face or more confident, happy lifestyle by a proud Clarins user. It’s just a bottle of product that conveys no sense of function or brand.

The heavy lifting in the ad is left to the copy, which reads

Clarins pioneers a new frontier of skin science - a supercharged serum that defies dark spots, dullness and wrinkles in 2 weeks.*

This triple action complex of Hexylresorcinal, a tripeptide and pioneer plant extracts helps correct the appearance of dark spots - while visibly lifting, firming and restoring the deep luminosity of young-looking skin. No worries. No regrets. No doctor's appointment. Consult with your Clarins Skin Care Specialist today. Made in France. www.clarins.com

*based on a consumer test.

The copy starts the race already hamstrung by a miles-wide separation from the graphic across a page break and a sharply defined colour border. It leads, not with promises of a prettier viewer, but accusatory questions. “Dark spots? Lines? Dull skin?” This is a fear-based ad, which comes across as deeply negative when laid alongside the magazine’s other positive, “beauty” filled ads. Phrases like “new frontier of skin science,” “pioneer plant extracts,” “deep luminosity of young-looking skin” corrupt the credibility of the ad’s simple layout by venturing into the ridiculous. A Clarinss Skin Care Specialist??? Where did they get their degrees?

An expensive example of how an ad has to be great in order to not be terrible.
Posted by Matthew TenBruggencate at 9:47 AM