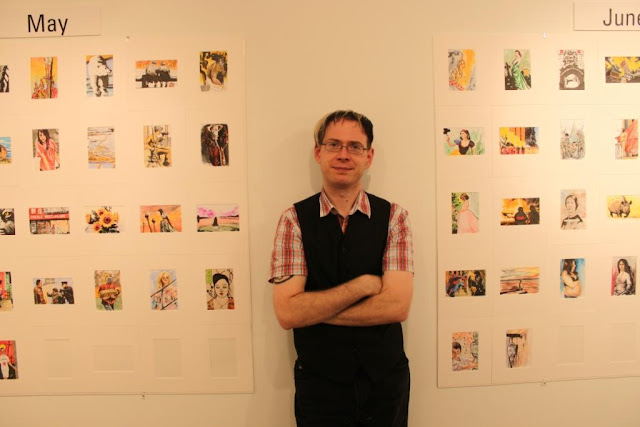 365 sketches, paintings and inks by Winnipeg artist Michael Joyal have just been installed at the cre8ery gallery on Adelaide Street. They're the final result of his yearlong quest to make an original artwork every day.

Arranged like days on calendar pages, the four-by-six pieces vary wildly in content. There are sketches of people from his daily bus ride to work, collages of animals, landscapes, and objects. A drawing of Lindsey Lohan - done on bright wrapping paper - marks Christmas Day.

"I can't remember why I did that; perhaps she was on TV."

The project begain in summer 2010 when Joyal, then 39, was browsing through an online sketchbook by German-American artist Stella Im Hultberg.

"I was going through her sketches and saw these amazing drawings - I was astonished at what she considered a sketch. They were thick with paint and ink, thick with detail - she had really worked the paper. It looked like they were aggressively attacked."

"And I felt like I had dropped the ball as an artist. I hadn't done anything in my sketchbook for a long time."

So on June 25, Joyal did a sketch before going to bed; not a quick drawing, but a longer, involved piece. The following night he did the same thing, trying to improve on the previous night's work. 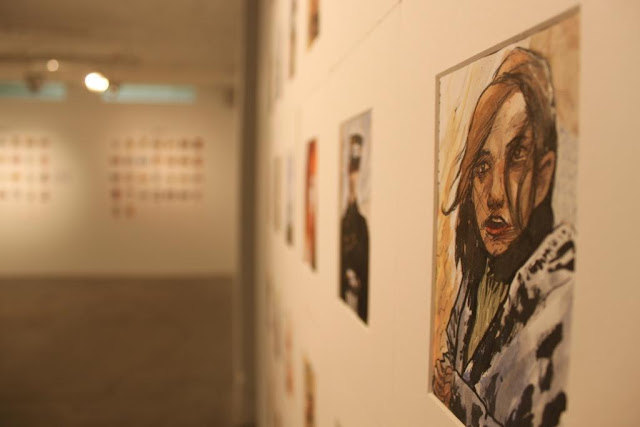 "The thought of a whole year occurred to me. And as I went on, day-by-day, I wondered, 'Can I get a show out of this?'"

As the months went by, Joyal's investment in his project grew. He had to spread the work throughout the day, doing rough sketches during his morning commute, painting on lunch breaks, then adding finishing details in the evening.

"Throughout the series, it became obsessive. I'd be working on a piece and wondering what to do four days in the future."

Joyal found the discipline required to keep going on the project - as well as the time it cost - were balanced by a growing confidence in his abilities and craft. He was also encouraged by a collection of Facebook fans.

"I'd post each piece online and my family and friends, they started to get eager to see the next piece. I could never guess their response - something I thought was okay they'd think was the second coming. Something I thought they'd love - meh. It proves you can't draw for the public, you have to draw for yourself." 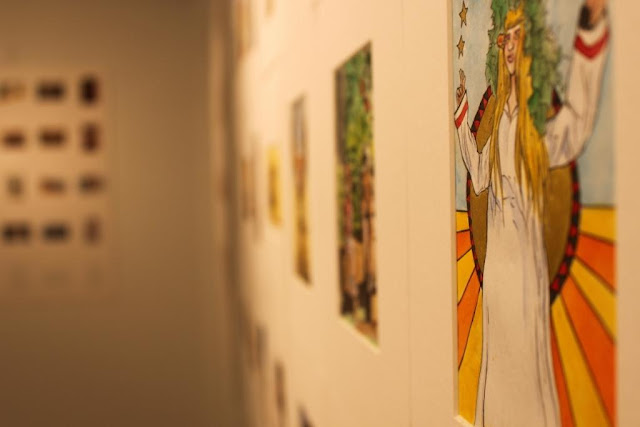 This past June 24, Joyal completed his final work in front of an audience at the Winnipeg Free Press Cafe. The installation on now at the cre8ery (free admission, running until February 21) is the first time all the works have been displayed together.

"I don't want to admit it," Joyal says, "but I do feel proud. Working on a four-by-six piece in a sketchbook each day, you get tunnel vision. Now, putting it all together, I realize how much work it was."

"When I look back at the whole year, I'm grateful for my wife, Suzanne. She gave up a lot of me for that year. One to four hours each day, every day. It's a huge gift she gave me."

"When we were prepping the installation, I let her put the last piece down on the calendar board. It was cool - we finished it together."

Now that 365 Days Before I Sleep is on display, Joyal hopes his work will encourage others to push their own boundaries.

"I hope this inspires people. It inspires me. Now that I've done this, I wonder, 'what else can I do?'" 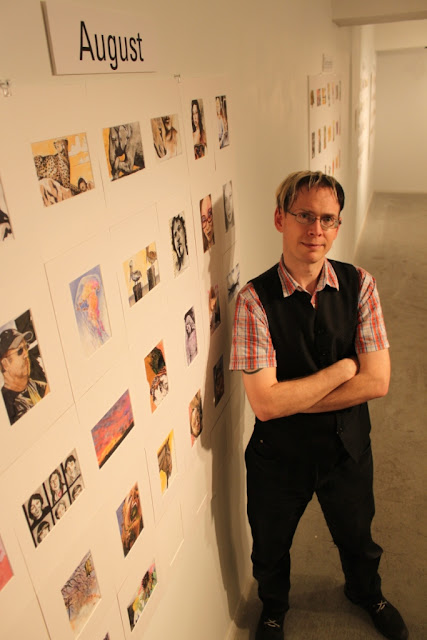 Posted by Matthew TenBruggencate at 11:09 AM