I"m lucky enough to be a member of Theatre by the River - a local, indy theatre company. We've recently started alternating our monthly Board Member/Artistic Core meetings with IdeaJams. Everyone brings something creative to the table that inspires them. It can be dance, food, music, a book, a sculpture or whatever.

And we had one earlier today. For my own reference - and maybe to spark something in your own mind and heart - here are some of the components from today's IdeaJam. 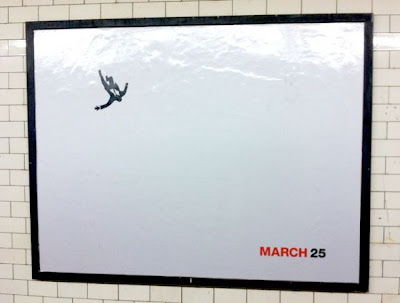 To launch its upcoming season, AMC's Mad Men had these posters placed in New York City subway stations. The wide open blank space invited contributions from passerbys and the mashups took on a life of their own. Participatory advertising, as I've said, is the future. 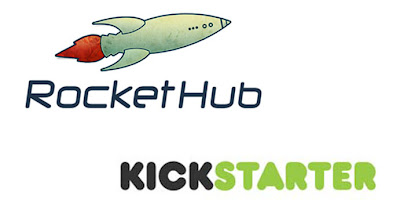 Funnily enough, two different crowdfunding sites came up today. Rockethub and Kickstarter allow those seeking financial support to connect with those seeking unique gifts. It's not fundraising; it's trading. Look at this Rockethub (for our own Derek Leenhouts band Those Guys cd recording project) to get an idea of how different donation levels get you different rewards.

3) The End of the Alphabet 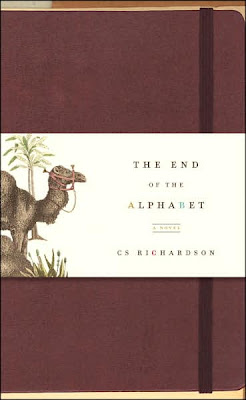 TBTR's upcoming Fringe play Lungs deals with a young couple debating whether or not to have a child in this environmentally endangered, socially unstable world. The End of the Alphabet, by Canadian designer-turned-author CS Richardson looks at the other side of the coin - an older, childless couple facing the inevitable parting mortality brings with it.

The quality of a fable, exquisite and timeless - Chatelaine
This is a very difficult book to put down at bedtime, even when the final page is turned - The Globe and Mail 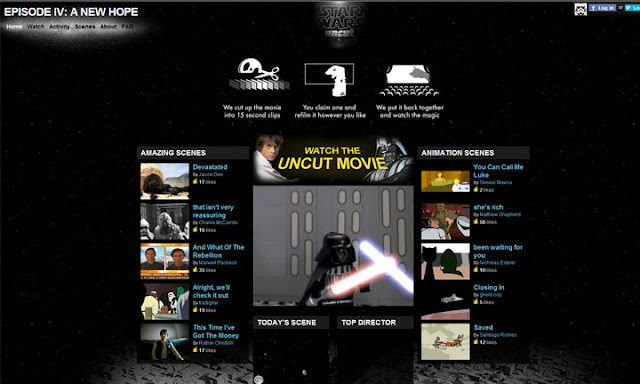 The guys behind Star Wars: Uncut divided Episode IV: A New Hope into 15-second bits. Then they put out the call for fans to replace sections with their own versions. Now the parts have been reassembled into the biggest collaboration in movie-making history.

Some clips are terrible (and good in their terribility). Some are brilliant. Go team.

There are good reasons to celebrate the move from analog books to ebooks. Portability. Reduced paper use. Sometimes - though not always - reduced cost.

And there are good reasons to love and defend printed books too; mostly the 'book culture' that they bring. Books on paper are little, permanent totems of learning and feeling, physical records of the thoughts and feelings of our species. And they're reasons to gather - the bookstore and the library aren't just any retail spaces, but cultural halls. And books are transferable in a way eBooks aren't yet. I've loaned and borrowed books (usually remembering to return them, I hope). Having an actual physical object there, existing, matters. Like the difference between a painting and a jpeg.

Oh, I do go on. Anywho, this short film from Moonbot Studios celebrates the book. Tah-dum.


One of our Board Members is doing her Master's Degree on the cultural narratives of cities. She's interested in the official stories that are sold in culture - especially Tourism pieces - and the stories that slip through the cracks. Witness the above, but watch out in case "fine English silverware catches your eye." 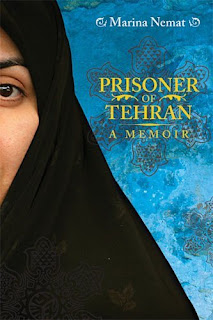 Marina Nemat was jailed and tortured as a teenager in Iran's infamous Evin prison. She would have been executed, if one of her guards hadn't decided to marry her. Now living in Canada, she published her memoir Prisoner of Tehran to acclaim and recent (ridiculous) controversy.

I don't even know how to begin describing this improvisational, ancient singing style. They make it up as they go based on what the other singers are doing. Amazing.

I can't find the online content (if there is any) but there are choirs that get together for the sole purpose of providing music as someone dies; as they transition out of this life and into whatever comes next.

My first reaction, I admit, was discomfort. My second was wanting to have such a choir for my own death. My third reaction is deciding not to die <pats own shoulder>


Finland is attempting to build the first permanent nuclear waste disposal site - a giant underground repository where spent fuel rods can be stored for as long as they're dangerous. 100,000 years.

Into Eternity is Danish film maker Michael Madsen's documentary on the project and the attempt to design 'keep out' signs our descendants will understand and heed. Because nuclear waste will be our longest legacy to the future.

***
So that was our meeting. Now to soak it all in and come up with new ways to be a socially relevant, artistically provocative and financially accessible theatre company. Plus kick ass.