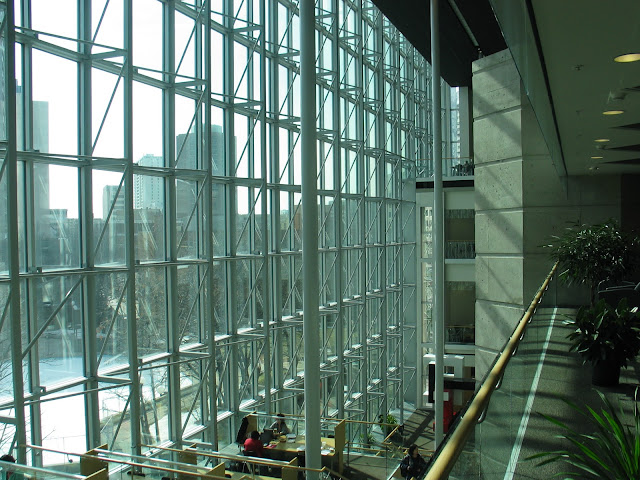 It's 9:50 am. I need back issues of the Winnipeg Free Press for research. I'm at the Millennium Library, waiting for the iron cage that protects thesauri, microfiche and periodicals to be rolled back by the five - five - security guards on the other side.

There's a strange mix around me. The unoccupied elderly; jittery students; street people looking to fill their hours with warmth and infotainment. There are subdivisions within these groups: the unbathed, unshaven man who naps with his head lolling back, gently mocked by his peers. There's a long haired goth hiding under his hoodie and clutching a briefcase.

The crowd is milling, restless. At five minutes to the hour, on cue, they form a line. I'm an outsider here. These are regulars, chased out at end of day and returning at first opportunity.

The hour comes and passes by a few seconds. No movement from the guards and the lineup's temperature shifts. The aura has changed. It wants its due.

And a guard notices. He groans, poor lamb. Slowly he reaches for the gate, then slams the slats together to push the thing open (the noise is clearly a pleasure). And the line heads in, not quite running, not quite walking, fanning out to pre-claimed nooks.

I love it. I love that there's still somewhere (anywhere) where some people (any people) will politely stampede for books.
Posted by Matthew TenBruggencate at 9:09 PM