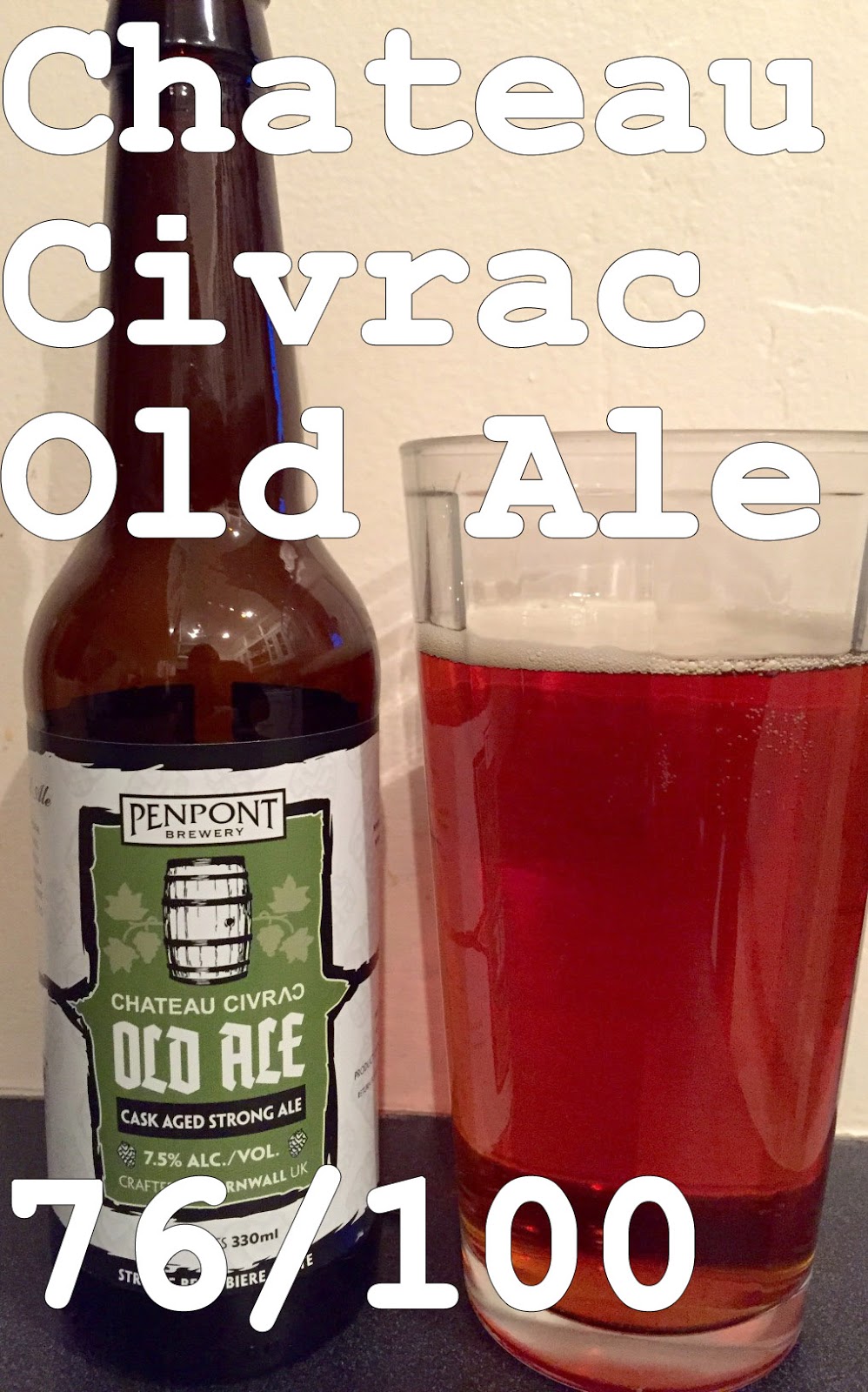 Today is the third day of the beer advent calendar.  It still has just as much fun and charm as it did two days ago.  My wife is wondering if I will become “bored” with it and if it will lose its excitement.  Stay tuned to the blog to find out (I doubt it.)

Today’s beer is a Chateau Civrac Old Ale – Cask Aged Strong Ale from Penpont Brewery in Cornwall UK.  You might be wondering why there is a French name on an English beer.  I wondered that as well.  It turns out that this beer is aged in wine casks from the Chateau Civrac vineyard in Bordeaux.  Hence the name.  Most cask aged beers I’m familiar with use rum casks for aging.  I’m rather excited for one aged in wine.

Penpont Brewery is located in Altarnun in Cornwall region of UK.  It’s rather far from London (245 miles) and is located quite inland.  The brewery was established in a converted milking parlour on the edge of Bodmin Moor, Cornwall.   They use their own local spring water and top quality ingredients in their beers and produce about 10 different beers.  This particular beer I will be tasting is not on their official beer list leading me to believe it is a special beer made specifically for the advent calendar (or they are slow at updating their website.)

With this beer we actually end up having two different varieties of beers combined.  To be fair, old ales were traditionally the ones that they kept at the brewery longer (also known as keeping ales) and so the big difference here is that it was kept in a Cask to age rather than in the standard brewing drum.  The first beer I tried, the winter ale, is a style of old ale as well.  Traditionally darker and more on the malty side of things these beers, in England, typically only range up to 5% alcohol.  Another deviation for this particular beer as it is at 7.5%.

Cask aged ales should not be confused with Cask ales.  A cask ale is a beer that is produced inside a cask which is then “tapped” and the beer poured directly from there.  Cask aged ales are beers produced using the more modern method of stainless steel drums and such but then are moved into a cask, in this case old wine casks, to be aged before being bottled and sold.  This allows the beer to take on the flavours of whatever was produced in the cask beforehand.  So, without further ado, let’s get to the beer!


Appearance: Nut brown with 1” of head which dissipates quickly leaving light rimming on the glass.
Smell: Hints of oak and wine combined with caramel-chocolate notes of the malt.
Taste: Starts sweet and rich with the malt coming through strong until the finish where you are left with strong tannins like a red wine.
Mouth feel: Smooth with a medium body and low carbonation.  Leaves the tongue feeling as though you have black tea leaves on it.
Overall: Excellent cask aged ale.  The uniqueness of the wine cask really brings another element to the beer. The oak and wine notes balance well with the sweetness of the malt.  My only complaint is the finish on the tongue.
Do I like it: I do like this beer, though it is not my favorite. The tannins, while something I love in red wine, I do not overly appreciate in this beer.  The smoothness of the malt and the oak of the cask work well together.  I could go without the tannins.
Posted by Matthew TenBruggencate at 6:23 PM