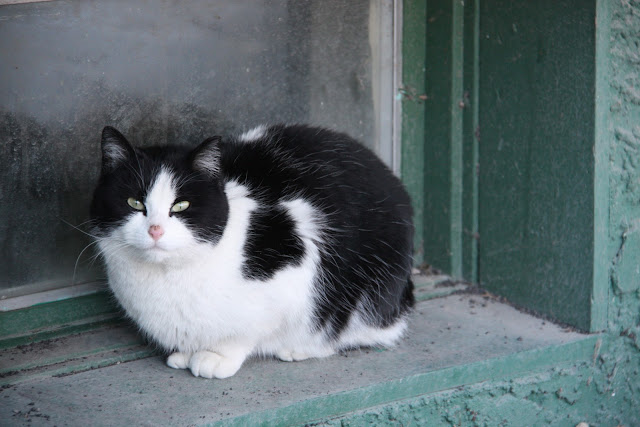 This is Oreo the Stray. I am her patron.

Our neighbourhood, like many in Winnipeg, has a number of stray cats who live pretty wretched lives in the winter (not fantastic lives in the summer either, but a little better). This is what happens when people don't spay and neuter their pets, let their cats wander or dump their unwanted pets.

I feel disproportionately enraged by this; I know there are other, worse things to get upset about. And I really don't believe in corporal punishment. But the deep desire to smack some jerks around rises when I think about strays.

Oreo started hanging around in September '10. She was (and remains) very shy. A number of strays will come up and play beside me when I'm working in the backyard. Oreo kept her distance for a long time. She would sit on the front step and cry for attention. A very human cry like a child (something cats learned millenia ago when they domesticated themselves). I put out a small dish of food for her, which she wolfed down. Then she was gone.

This event repeated over several fall evenings. She wouldn't show up every night; that would be too predictable. And I wasn't allowed to pet her. She would jump back when I tried and look at me as if I were Norman Bates.

One evening, however, I succeeded. I sat on the steps and watched her eat. One of the hypocrisies of my feeding Oreo is refusing to feed her streetmates. Often other cats will come and try to steal food from Oreo (she's an older female and timid). And I chase them off. They're no less deserving than her, but I don't want all the neighbourhood cats hanging around my house. And she was here first.

I reached out very slowly while she worked away at her bowl. She paused. It looked like she might dash. She lowered her head and kept eating. I made contact with her back. And she arched her shoulders up to meet my scratching fingers. She purred deeply, rumbling from her chest.

Since then I've been allowed to pet her. Not for long, but for a few minutes, she'll nuzzle her head against my leg and submit to gentle patting and scratching. I can't pick her up (I tried once, she fled) and she won't come in the house (except once last winter when it was -45 Celsius - she stepped onto the front mat and stayed for an hour of warmth, while our two house cats watched her, mystified). But she has gradually lowered her guard. And I have gradually gained a streetwise friend.
Posted by Matthew TenBruggencate at 10:00 AM