Balancing the Iconic and the Intimate


How do you fit a three-story house into thirteen feet of space?

That’s the task designer Brian Perchaluk faced when director Ann Hodges approached him one opening night last year, asking him to design the set (and costumes) for August: Osage County. The original 2007 production featured an onstage, multi-story house that proved so iconic, subsequent Broadway, touring and international productions have nearly always resurrected it.

But the Tom Hendry Stage at the Warehouse – the venue chosen for August: Osage County – only has 12 feet 5 inches between floor and I-beam.

“At first, we tried to be more naturalistic,” Perchaluk says, “to have more walls; more stairs. We had staircases with 8 steps at one point, separating the floors. But a person standing on the top floor of that configuration would have their head in the lighting grid. It felt forced. We just didn’t have the space.”

“Ann and I talked about the ‘Big House’ set design, trying to figure out what statement it made on the family and the generations - what the family used to be. What could we find that could be as important to our production?”

Perchaluk kept coming back to the windows. Shuttered in the first two acts, the house’s windows are barriers that keep outsiders from peering in – and the Weston family from looking out. If windows are the eyes of a house, these eyes are tightly shut, like the absent eyes in T.S. Eliot’s poem The Hollow Men.

Other poetic sources, referenced by the script, also emerged to help guide Perchaluk’s design, such as John Berryman’s The Curse.

Only the idiot and the dead
Stand by, while who were young before
Wage insolent and guilty war
By night within that ancient house,
Immense, black, damned, anonymous.

Perchaluk has tried to weave these colours into his minimalistic set. The windows hang in dark voids. Rooms appear to be near each other, but have a distinct disconnect – a quality Perchaluk lifted from the central family. Tufts of dead, dry grass suggest a desolate, Oklahoma plains beyond the walls. The goal is to suggest a house formerly of substance, diminished by abandonment and neglect. 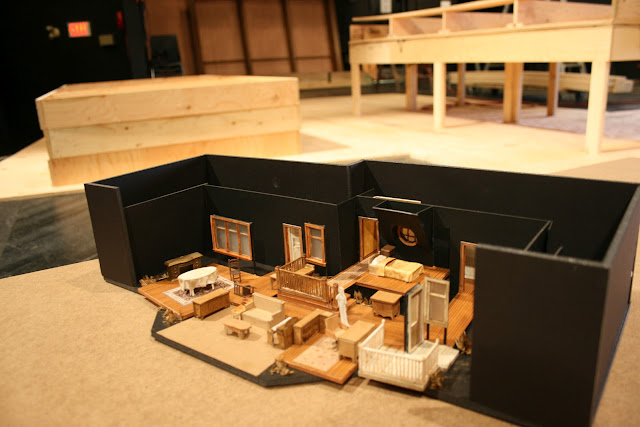 While layering in these stylistic elements, Perchaluk is blunt about his main goal as designer for August: Osage County – functionality. After all, a play with 13 actors onstage using five main acting areas (often simultaneously) requires a very particular arrangement to make logical sense to an audience. And prevent bodies from bouncing off each other.

“Most of the energy has been focused into the geography – fitting this play into this space... it hasn’t been frustrating, more a process of refinement.”

“It’s such a rich, well-crafted piece, the set just has to function so the story will happen as best it can. I really think the set should be an afterthought – that’s usually how I approach my work. You need to give the actors space to do the play. That’s where the bang for your buck is; it’s not about the set.”

“The poetry is secondary, but it’s simmering there underneath.”

Perchaluk’s attitude is backed up by a long resume of experience; this is his 50-ish design for RMTC (he says 50-ish after losing count over the years). The Roblin, Manitoba native actually credits RMTC with sparking his interest in theatre. As a child, he was deeply impressed by the touring productions the theatre sent to his school, eventually heading to University of Winnipeg and National Theatre School to launch his career in theatre design. He’s pleased for chances to give back to RMTC, particularly on a play as provocative and well-crafted as August: Osage County.

“With some plays, it’s an uphill battle and you work and work, but you know the play is going to be a dud. When you’re starting off with a great piece like this – it’s 80 per cent there, in the script. You just need to make sure you support it and don’t screw it up.”

Even with a tight playing space, that doesn’t seem likely. Director Ann Hodges sums up the advantages of Perchaluk’s design.

“We don’t have the iconic image, but we will place this family drama - this vicious play – 20 feet away from the audience. We will, instead of the icon, have intimacy.” 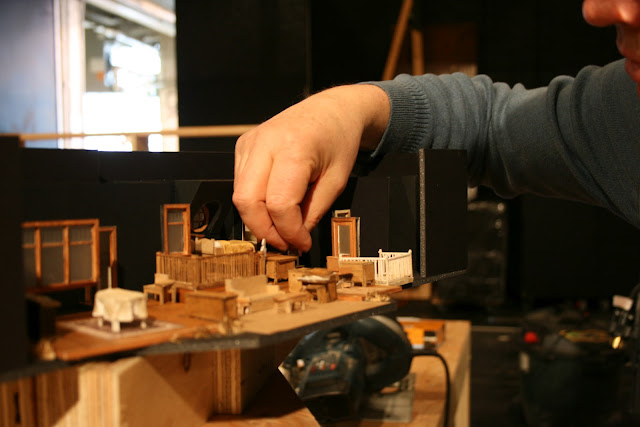