Prairie Theatre Exchange’s main space is in a state of controlled chaos as the media call for Altar Boyz – PTE’s current co-production with Winnipeg Studio Theatre – gets going. Lights shoot from every angle; the accompanist strikes a few chords on his piano; the five actors who make up the mock Christian boy band warm up their voices – each rehearsing a different song. Artistic Director Bob Metcalfe has to shout to rein everything in.

Then the guys leap into their first song and dance (We Are the Altar Boyz) for the gathered cameras. It’s a jumping, twisting number, welcoming Winnipeg to the final show of the ‘Raise the Praise’ tour. The Boyz harmonize and gyrate for the sake of their audience’s souls. The piece ends and the guys are covered with a light sheen of sweat. Their chests are heaving. Then they do it again. And again.

And despite 12-hour rehearsals over the past three days, the piece still sparks with energy. Three years after the satirical Altar Boyz made a sweeping run at the Winnipeg Fringe Festival, these guys are pumped to be back.

“We’re so lucky that things worked out, that we get to be here with the same cast,” says Jeremy Walmsley, who plays boy band leader Matthew. He’s joined by Joseph Sevillo (Mark), Michael Lyons (Luke), Marc Devigne (Juan), and Simon Miron (Abraham, the band’s lone Jew) to fill out the cast of the 2005 Off Broadway hit. Each actor is nostalgic about the 2009 Fringe production.

“Every show sold out,” says Lyons. “We always had line ups. And the audience really got into it –”

“They got super loud,” Walmsley adds.

“Coming in for a show and having lineups stretch to the Globe, it was surreal,” Miron says. ”You do feel like a rock star doing this play.”

“It’s rare that you get a chance to do something you love twice,” says Winnipeg Studio Theatre director Kayla Gordon. With this co-production, she’s gained the budget for a full set, costumes and props – the original run was scaled down due to Fringe setup constraints. The cast has also gained the time to find a more refined, blended sound.

“We’ve switched up some of the parts to clean things up, make it more specific,” Walmsley says.

“To get five guys with different vocal training to blend, that’s hard,” Miron observes. “This time, we’re trying to sound just like the album; it forces you to lift up your performance.”

Walmsley looks at the lights and glowing stage, then smiles. 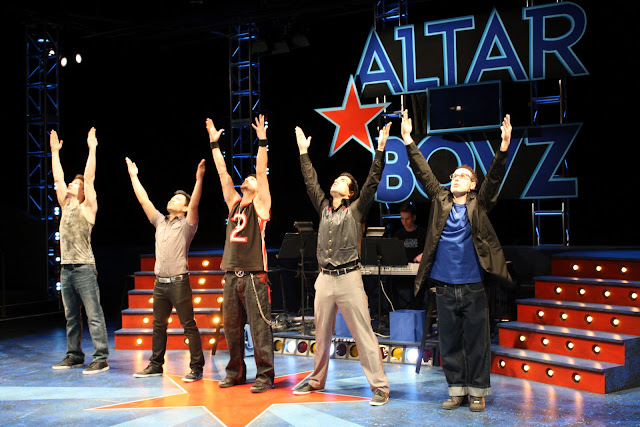