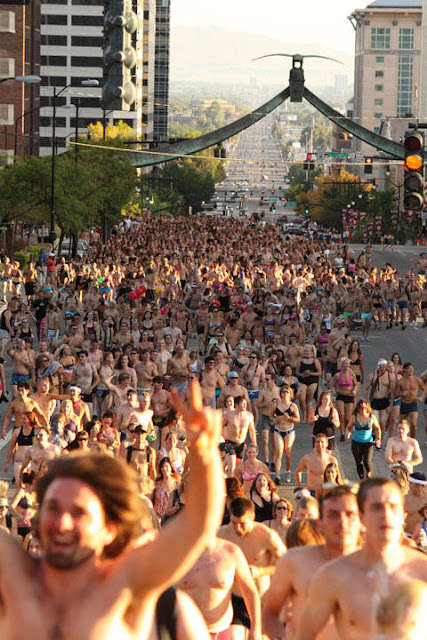 Nate and Aimee Porter were sick of Utah's deeply conservative politics (restrictive liquor laws/adoption laws/anti-equality legislation). They were tired of Utah being perceived - both in and outside the state - as an uptight, religious enclave. They wanted to do something about it. So they ran 5 miles across town in their underwear.

The 2011 Utah Undie Run was a "Protest Against Utah Being So Uptight" (their words). It started quietly enough with Facebook invitations to 500 people. But those people started inviting other people, until the I'm Attending list reached over 12,000 people. Local businesses that were tied up in quasi-religious red tape came on board as sponsors. Participants were given a dress code (no thongs, nothing see through) to help avoid tickets from the waiting police. And they were invited to write whatever slogan they wanted on their bodies. While the Porters had particular issues that motivated them to launch the event (their stated hope was to register 3,000 new young voters) this was an open source protest.

All 12,000 people didn't run, but 2,270 did, setting an official Guinness Record for Largest Gathering of People Wearing Only Underpants/Knickers. The event received local, national and international press. 1,500 clothing items were donated by runners to a local charity.

Why was did this event succeed so well? 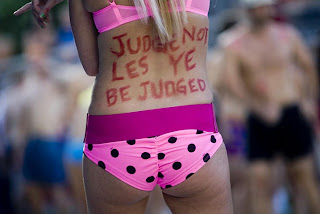 1) Shared Cause + Open Cause   The restrictive, conservative nature of Utah's politics was a banner to rally around, but Undie Run 2011 let people own the event, inviting them to bring their own personal cause

2) Breaking a Taboo  Running around in your underwear is scandalous, sexy and silly all rolled into one. Offering Utahns a chance to break the rules without breaking the law worked.

After all, you can pack light. 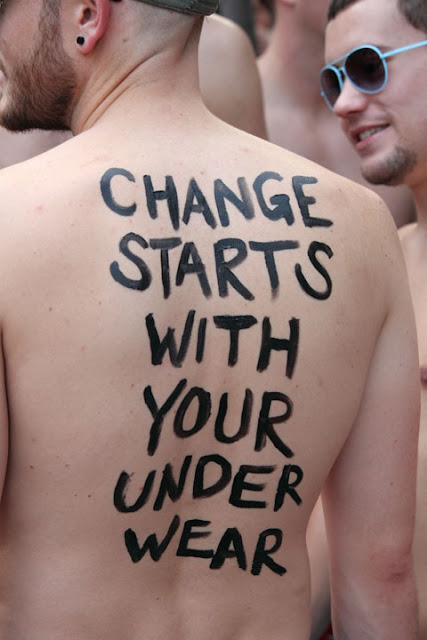